As a teen, the sixties rock band–The Cyrkle wasn’t a favorite.  They were contemporaries of the Beatles–never as popular.

“Turn Down Day” struck a chord as an anthem to nonconformity. Perhaps an ode to late night revelers that slept till noon the next day?  “Red Rubber Ball,” shall I compare thee to the bright summer sun?  No way–it wasn’t my groove.

I like to think remembering details from childhood is more a sign of my OCD tendencies, than senility.  There were several “hometowns” during these early years, as my father changed careers.

There were kids that stood out from the crowd–remembered because they seemed world-wise beyond their years; were bullies or neighborhood troublemakers.  Johnny Farkas, from Miss Kramer’s, Garfield School first grade class, in Canton, Ohio–why did I remember your name?

In Greenville, it was the Graves brothers.  During the early fifties, they terrorized my older brother with tales of Russian invasions.  They took advantage, hogtied him to a tree, with the warning, “When the noon fire siren blew, the Russians were coming to get him.”

The McNamara brothers lived next door in southwest Canton, Ohio.  They had things we didn’t have–a television, and BB guns.  The father, apparently had, had some run ins with the law.

In tiny Medora, IL there was a family at the end of the block with a brood of feral, firebrand children.  The youngest boy was three, roamed the neighborhood in his diaper–if he wore clothes at all.  He could typically be found on their front porch smoking smelly cigars.

Why did some of these little geniuses have all the answers about birds-and-bees?  Not that the information given was accurate.  Repeating their risqué jokes risked being overheard, and subsequent punishment.  Were you one of those guys–Johnny Farkas? 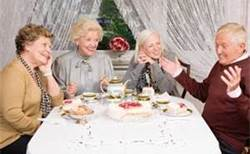 I have some things to say

Will you join me for tea?

Or will you turn away?

Perhaps stop and stay a while?

I’ve got quite a lot to say

Why are things that way?

Was it something I said?

No, the teapot’s frightfully ugly

I simply must be going