My first name is “William,” middle name “Arthur.”  As a matter of fact, all, of my three names, could be first names.  If I was named after someone, it had to be an obscure relative on my mother’s side of the family.  I fantasized about being named for historical figures–like “William the Conqueror,” or “King Arthur.”  If that were true, imagine my parent’s disappointment, when I didn’t live up to expectations.

From “William” came the usual nicknames: “Will,” “Willie,” “Bill,” and “Billy.  To which unflattering modifiers were added by cruel schoolmates, that will remain secret.  The nickname that stuck was “Bill.”  In adolescence, my first name suddenly became boring.  What could I do to punch up my identity–make my mark?  One idea, was shaving off my hair, replacing it with tattooed-on hair.  Thank goodness that never happened.

Perhaps a distinctive name, difficult to pronounce?  …With lots of consonants, few vowels, silent letters.  Then, I could feign indignantly, when my name was mispronounced.  …A different spelling?  Why not “Bill,” with three “L’s?” Maybe something like “ZX729,” consisting of letters and numbers?

Several years later, the rocker “Prince,” seized the opportunity, changed his name to an unpronounceable symbol.  It was a gigantic flop.  People didn’t have time or patience for this naming nonsense and used the abbreviation TAFKAP, (The Artist Formerly Known As Prince).  Explanations of identity proved more troublesome than his conventional name.

I’m “William Arthur,” for a brief imaginative moment, known as “ZX729.” I’m happy with my name and who I am!  Although, junk mail comes addressed to “Occupant.”  Now, there’s a very distinctive name. 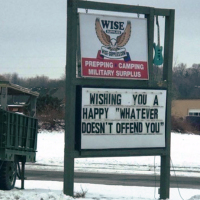